In modern times, we often speak about different categories of friends: friends on social media, “old” friends, “good” friends, and “best” friends. Some folks have only a few friends; others have a bunch.

Is “friend” one of those words we all understand without needing a technical definition? Probably so, but one simple meaning given for “friend” is “a person you know well and regard with affection and trust” [www.definitions.net]. Perhaps you have seen this quote: “A friend is someone you can do nothing with and enjoy it” [www.wonderfulquote.com].

A special friendship existed between David, the king-in-waiting at the time, and Jonathan, the son of King Saul. Their friendship was a blessing to both of them. It is in 1 Samuel 18:1-4 that the close bond between them is mentioned in the Bible for the first time. There it is written:

(1) Now when he had finished speaking to Saul, the soul of Jonathan was knit to the soul of David, and Jonathan loved him as his own soul. (2) Saul took him that day, and would not let him go home to his father’s house anymore. (3) Then Jonathan and David made a covenant, because he loved him as his own soul. (4) And Jonathan took off the robe that was on him and gave it to David, with his armor, even to his sword and his bow and his belt.

For most people, it is a natural thing to desire to have friends. What do we see in the relationship that existed between Jonathan and David, and what lessons can we take away from their friendship?

 They made a covenant with one another (1 Samuel 18:3; 20:8). Friendships which struggle to find common ground and matters of agreement will not be enduring ones.

 They shared material blessings with one another (1 Samuel 18:4). What good friends do not do that?!

They shared helpful information with one another. In one instance, Jonathan warned David, “My father Saul seeks to kill you” (1 Samuel 19:2). True friends “look out for” each another.

 They served one another. David once told Jonathan, “Therefore you shall deal kindly with your servant, for you have brought your servant into a covenant of the LORD with you” (1 Samuel 20:8).

 They vowed to show kindness to one another’s family, even after one of them died. Jonathan’s appeal to his friend was, “And you shall not only show me the kindness of the LORD while I still live, that I may not die; but you shall not cut off your kindness from my house forever . . .” (1 Samuel 20:14,15). Following Jonathan’s death, David asked, “Is there still anyone who is left of the house of Saul, that I may show him kindness for Jonathan’s sake?” (2 Samuel 9:1). David kept his word, giving great assistance to Jonathan’s son, Mephibosheth (2 Samuel 9:6-13).

 They stuck together, even through trying times. When Jonathan’s father tried to drive a wedge between him and David, and when it became apparent that it no longer would be safe for David to come around Jonathan, their friendship did not waver (1 Samuel 20:41).

 Unlike his paranoid father, Jonathan was not jealous of David. Most of us have seen friendships decay and disintegrate when jealousy took over the heart of at least one of the friends. Jonathan knew that he would not become king, but he was ready to assist his friend, saying to David, “You shall be king over Israel, and I shall be next to you. Even my father Saul knows that” (1 Samuel 23:17). He sounded like John the Baptizer, who readily accepted his God-given role: John would not be “number one,” but he was happy for and happy to serve the One who was (John 3:30).

 Their friendship was based on love, meaning they cared about what was best for one another. The Bible says Jonathan loved David “as he loved his own soul” (1 Samuel 20:17). Some have tried to depict the relationship between Jonathan and David as being homosexual in nature. There is zero proof that such was the case. They were grown men who loved each other dearly, but there was nothing inappropriate about their relationship.

 The strongest thing their friendship had going for it was their individual commitment to the Lord. When David’s life faced great challenges, what did Jonathan do? “Then Jonathan, Saul’s son, arose and went to David in the woods and strengthened his hand in God” (1 Samuel 23:16). What a blessing to have friends like that! Wise servants of the Lord choose as their closest friends those who care about their souls and want to help them serve God and go to heaven.

The Bible says, “A friend loves at all times” (Proverbs 17:17). We see that evidenced in the lives of David and Jonathan. Both Jonathan and David had fleshly brothers, but it is the friendship of those two that stands out in the biblical record. “A man who has friends must himself be friendly, but there is a friend who sticks closer than a brother” (Proverbs 18:24).

Some people are “fair-weather friends.” That description definitely does not fit David and Jonathan, does it? They were loyal to God and to one another. Do others see you and me acting as that kind of friend? 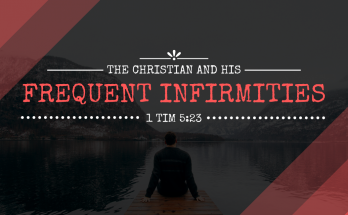 The Christian and His Frequent Infirmities 1 Tim 5:23b 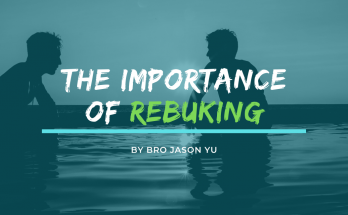 The Importance of Rebuking

WHO HAVE NO HOPE